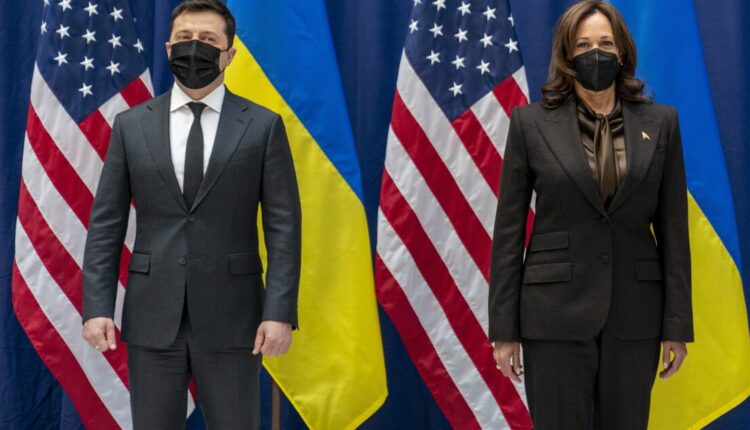 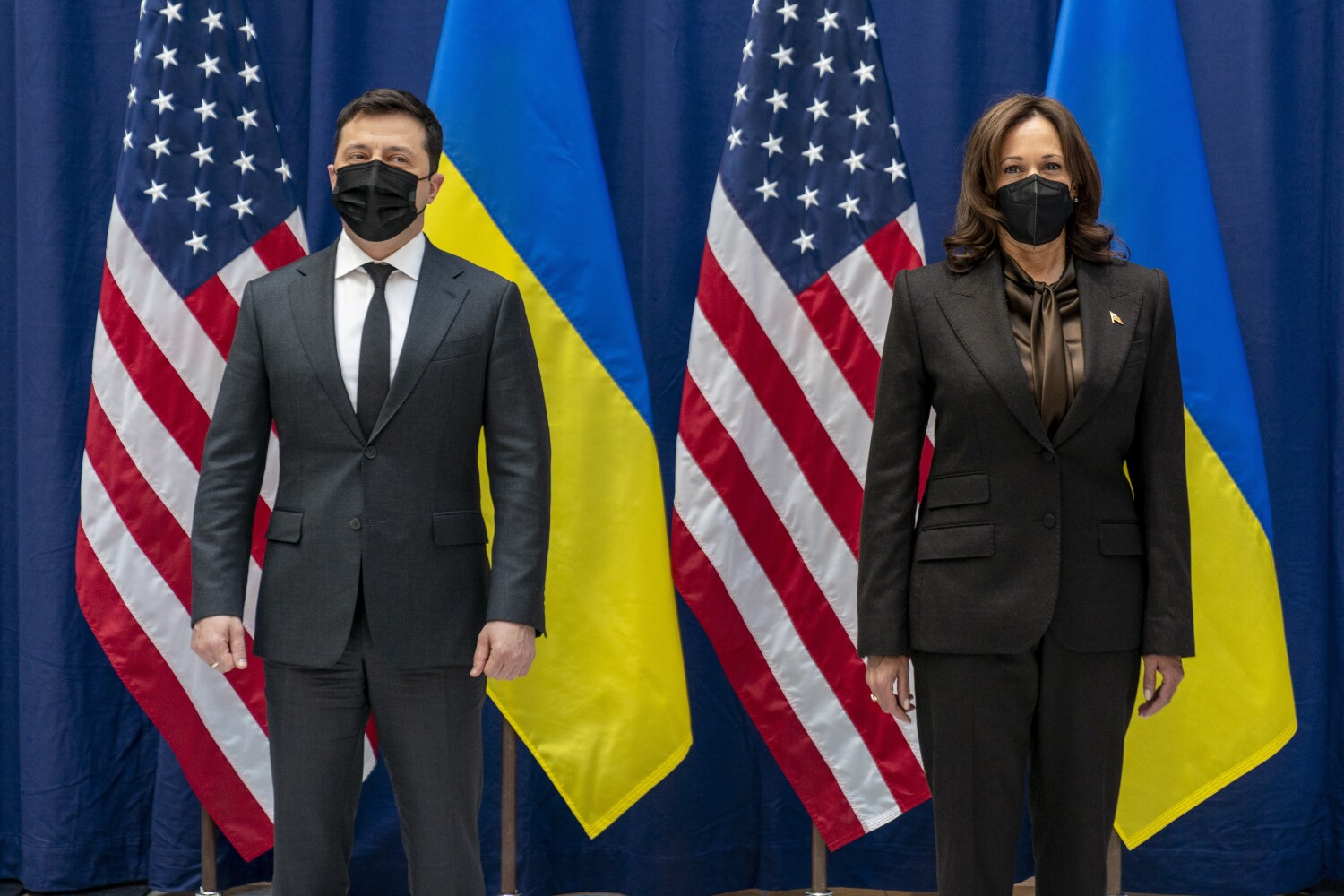 MUNICH, Germany — Kamala Harris, the Vice President of the United States, stood beside Volodymyr Zelensky, the Ukrainian President. She vowed U.S. assistance to the nation that is on the brink.

“The United States stands with Ukraine,” Harris said at the outset of a meeting between the two leaders and a small group of aides. “Any threats to your country, we take seriously, and we have rallied our allies and our partners to speak with one voice.”

Zelensky, speaking through an interpreter, told Harris he was “grateful” for America’s support and suggested that he’d be requesting additional defense aid even as he expressed hope that the threat of economic sanctions from the West could lead to a diplomatic solution.

“This is our land, and the only thing we want is peace,” said Zelensky, who also urged the U.S. to immediately impose sanctions on Russia and not wait for further incursions into Ukraine. “We are grateful to you,” he told Harris, “for your understanding that the sanctions may bring about a peaceful resolution of this matter.”

The symbolism of their meeting affirmed the West’s support for Ukraine as it finds itself once again threatened by Russian forces. Zelensky didn’t come to Munich for the sake of symbolism and pleasantries. Zelensky, who was on the brink war with his country, expressed his anger at the relative complacency of his allies and his dismay at the prospect of Russian tanks.

The Ukrainian president, who decided to fly to Germany for meetings with the allies helping to fortify his nation’s defenses, pointedly questioned why the U.S. seemed to resist imposing sanctions until Russian troops rolled across his borders.

“You are telling me that the war will start 100% in the next days. Then what are you waiting for?” Zelensky said, drawing attention to the assertion of U.S. officials that Russian President Vladimir Putin has already made up his mind to attack.

Zelensky also stated that he is not going to cave to Putin who demanded that Ukraine be excluded from the North Atlantic Treaty Organization. Zelensky expressed interest in NATO membership, and called into question the sincerity by the U.S. as well as its allies for not fully embracing that stance.

“Open doors are good, but we need answers,” said Zelensky, speaking at a major security conference here after his meeting with Harris. “If you don’t want to see us there, be honest about it.”

Following his meeting with Harris, Harris gave a 13-minute speech to the Munich Security Conference. Harris reiterated the warnings that President Biden had made in recent days and laid out the consequences to Russia if he launches an invasion.

“Let me be clear, I can say with absolute certainty if Russia further invades Ukraine the United States, together with our allies and partners, will impose significant and unprecedented economic costs,” Harris said, addressing the security conference.

Russia’s buildup of forces along Ukraine’s border has also helped to unify the 30 members of the North Atlantic Treaty Organization, Harris said.

“The United States, our allies, and our partners have achieved remarkable unity,” she said. “It is evident in our shared acknowledgment of the threats, our united response, and our determination to uphold the international rules and norms.”

Biden told reporters on Friday that he believed Putin had already made a decision to invade Ukraine, despite months-long pressure from allies. He then addressed heads of state, defense and diplomat ministers and a bipartisan contingent U.S. lawmakers.

The standoff with Russia stems from Putin’s demand that NATO agree not to admit Ukraine as a member. NATO and the U.S. have rejected this suggestion, saying that they will not allow a sovereign country to join the alliance.

Putin has long expressed disdain for Ukraine’s independence from Russia and the prospect of its aligning itself more closely with the rest of Europe. The West condemned his 2014 annexation from Ukraine of Crimea. It also placed economic sanctions on him. The resulting sanctions have not stopped him from considering another invasion.

Putin in recent weeks has deployed about 150,000 troops around Ukraine’s borders. U.S. officials have rejected Moscow’s suggestions this week that it has pulled back some of those forces. According to U.S. officials, more troops have been deployed to the region by the Kremlin. Biden and other top officials in the administration believe that an attack is imminent.

“They are uncoiling and poised to strike,” Defense Secretary Lloyd J. Austin III told reporters on Saturday during a news conference in Lithuania.

Austin shared the optimism of other U.S. officials and said that he believes in diplomacy. “Mr. Putin can choose to follow a different path. The United States in lockstep with our allies and partners have offered him an opportunity to pursue a diplomatic solution,” Austin said.

Antony J. Blinken Secretary of State has accepted an offer to meet next week with his Russian counterpart. This meeting, U.S. officials claim will only occur if Moscow does not attack Ukraine.

Zelensky, during a question and answer session after his speech, expressed appreciation for the U.S. approach to the crisis, but made clear he does not accept Washington’s conclusions that war is imminent.

“The intelligence I trust is my intelligence,” the Ukrainian leader said. He said that his military had not responded to Russian and its allies’ provocations in a way that would allow the Kremlin to invade.

“We’re not panicking,” Zelensky said. “We understand who is killing us, we understand what these military groups are, but we also understand when they are shooting from the localities surrounded by civilians to provoke us to start an escalation.”

Recent days have seen the crisis escalate. On Saturday, Russia conducted large-scale nuclear drills that the Kremlin said Putin observed from his defense ministry’s situation room. Russia-backed separatists ordered a full mobilization of military forces in the enclave they control in eastern Ukraine on Saturday, one day after calling to evacuate the entire area.

Denis Pushilin, the head of the pro-Russia separatist government in Ukraine’s Donetsk region, in a statement cited an “immediate threat of aggression” from Ukrainian forces as the reason for the mobilizations.

Ukrainian officials denied any suggestion of an assault and U.S. officials raised alarms over Russian plans to use disinformation as a pretext for war.

Harris echoed Biden’s position that Russia and allied separatists were engaging in so-called false-flag operations to lay the ground work for an invasion. Separatists claimed, for instance, that they were victims to Ukrainian artillery, sabotage, and car bombings. These claims are denied by U.S. officials and Ukrainian officials.

“Russia will plead ignorance and innocence, it will create false pretext for invasion, and it will amass troops and firepower in plain sight,” she said. “We now receive reports of what appears to be provocations. And we see Russia spreading disinformation, lies and propaganda.”

Harris’ speech struck similar themes as her comments Friday during meetings with NATO Secretary-General Jens Stoltenberg and the leaders of three Baltic states that border Russia, to whom she emphasized the strength of a unified alliance and the importance of defending the democratic values that bond them together.

Stokols reported in Munich, Germany and Bulos in Kramatorsk (Ukraine).

Walmart, Coke, and 8 other companies that increased their stock dividends